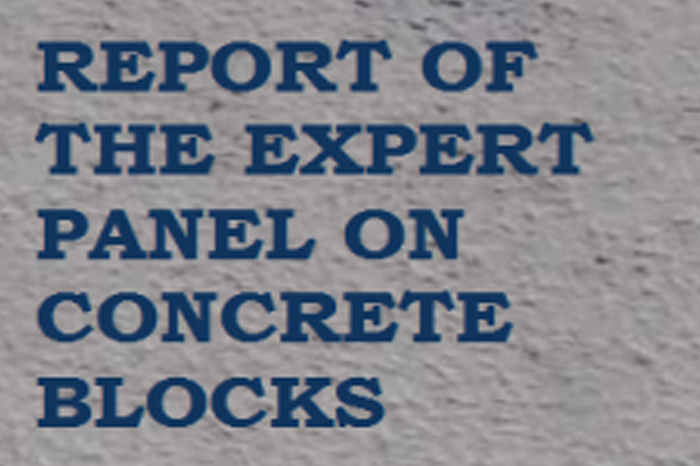 The Minister of State for Housing and Urban Renewal, Damien English, T.D., today 13th June 2017, announced the publication of the Report of the Expert Panel on Concrete Blocks.

“I trust this report will provide useful information to the Minister, which will inform Government of the nature and extent of the problem that has caused much distress to homeowners in Counties Donegal and Mayo, who have experienced the deterioration of their homes since they were constructed. I also hope that the report will assist affected homeowners in finding an acceptable solution and remediation measures for their impacted dwellings”

It should be noted that the Expert Panel on concrete blocks was established by the Department of Housing, Planning, Community and Local Government in April 2016, to investigate the problems that have emerged in the concrete blockwork of certain dwellings in Counties Donegal and Mayo. The Expert Panel on concrete blocks met with many key stakeholders, including affected homeowners, the elected members of Donegal and Mayo County Councils, local authority officials, industry bodies, academics, public representatives and other interested parties. A substantial volume of information was provided by affected homeowners in both counties, as well as from Donegal and Mayo County Councils, while additional information was also provided through the deliberative process of the Panel.

In relation to the scale of the problem, based upon the information received, the Panel estimates that the minimum number of private homes affected in County Donegal is likely to be approximately 1,200 dwellings although there may be as many as 4,800 dwellings potentially affected. In addition, a total of 541 social housing units are considered to be affected by Donegal County Council principally located within the Letterkenny and Inishowen Municipal Districts. This figure may rise as the Council continue to investigate the emergence of the problem within their housing stock.

In the case of County Mayo, the Panel estimates that the minimum number of private dwellings likely to be affected is approximately 345 dwellings. Based upon the available information, the Panel cannot be more definitive than this in their estimation. A total of 17 social housing units across 3 estates are known to be affected by Mayo County Council.

The Panel’s report concludes that the nature of the problem is manifested primarily by the disintegration of the concrete blocks used in the construction of the affected dwellings in Counties Donegal and Mayo. This in turn has resulted in the appearance of a particular pattern of cracking in the external render of these dwellings. The dwellings are single storey, dormer and two-storey with both housing estates and one-off rural types constructed by contract and by self-build affected. On the basis of the information received, the Panel is of the view that the reason for the widespread pattern cracking in the affected dwellings is primarily due to excessive amounts of materials in the aggregate used to manufacture the concrete blocks which gave rise to deleterious effects. The material in County Donegal was primarily muscovite mica while in County Mayo it was primarily reactive pyrite.

In many of the affected dwellings, the problems appear to have been exacerbated by their location in geographic areas of severe exposure and the ingress of moisture into the concrete blocks; the problems were possibly accelerated by the extreme weather conditions arising in the austere winters of 2009 and 2010 in particular.

Minister English stated the following “There are eight recommendations contained in this report and my Department will be taking action immediately to implement recommendations 1 and 2 as priorities, and will be in contact with relevant bodies shortly. In addition and in light of the information contained in the report, I have asked my Department to consider what further actions may be required to assist the parties directly involved in reaching a satisfactory resolution to the problems that have emerged in the two counties”.

He concluded: “I would like to extend my thanks to Mr. Denis McCarthy (Chair), Mr. Noel Kane, Mr. Frank Lee and Mr. Dave Blaney for the excellent work they have carried out in developing this informative and comprehensive report”.

Any queries in connection with the report, please telephone: 01 888 2093. Alternatively, queries can be e-mailed to blockreport@housing.gov.ie. 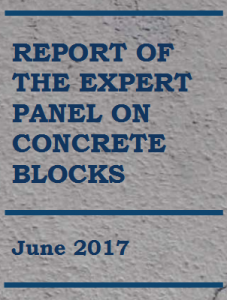